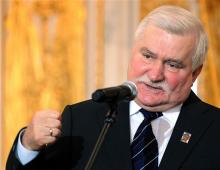 Interview with Lech Wałęsa: 'Let’s see how much NATO is worth'

'If the Law and Justice win the elections to the European Parliament, they will actually lose', former President of Poland tells Jacek Nizinkiewicz...


Defense Sequestration: Spending Cuts Needed, but Get the Policies Right

Tonight’s presidential debate is a good opportunity for President Obama and Governor Mitt Romney to tell the nation what they would do about our spending crisis and the looming fiscal cliff—in particular, the problem of the automatic defense budget cuts.


Syria: Fall of the Regime with Risk of Libanization

Damascus -according to agencies reports- keeps making use of a dissordered offensive against the forces of the Free Syrian Army (FSA), without reaching acceptable results in the military field. While the government of al-Assad peers over the cliff, the geopolitical reconfiguration of the region seems quite far from a 'happy ending'.

UNITED STATES: FROM THE DEPARTMENT OF JUSTICE


Obama Faces the Music of His Unsuccessful Policies

President Obama’s speech to the Congressional Black Caucus (CBC) this weekend was another rallying cry to pass his new jobs bill. Meanwhile, the country is losing faith in the “hope and change” people voted for less than four years ago.