Thirty years ago today, the Argentine army invaded the Falkland Islands, a sovereign British Overseas Territory in the South Atlantic...

Thirty years ago today, the Argentine army invaded the Falkland Islands, a sovereign British Overseas Territory in the South Atlantic.

A brutal military regime in Argentina calculated that a weakened United Kingdom, increasingly stripped of the elements of national power, would be unable to respond to a military fait accompli. Recovery of the Falklands [las Malvinas to the Argentines] over which Argentina has claimed sovereignty for decades, would, the generals believed, reawaken national unity and rescue the flagging popularity of a military regime that had waged a Dirty War of disappearance and torture against its own people. 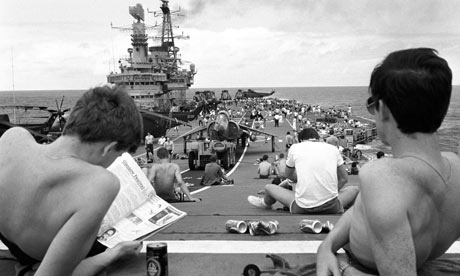 Then British Prime Minister Margaret Thatcher galvanized a nation into resisting the invasion and organizing the campaign in the South Atlantic to free the islands’ inhabitants from Argentine occupation. It was a classic response to “unprovoked aggression” and a victory for self-determination. For her fortitude and a nation’s determination and sacrifice, the “Iron Lady” won global recognition for decisive international leadership.

At the time of the invasion, the Falklands had been a permanent British settlement since 1833. The first known landing there was made in 1690 by a British naval captain, John Strong. The islands were named after Viscount Falkland, a prominent British lawmaker. The British, French, and Spanish all had settlements on the islands at various points until the last European settlement was abandoned in 1811, leaving the islands uninhabited. In 1833, the British re-established a settlement, which has been there ever since.

To this day the strongest argument governing sovereignty over the Falklands remains its inhabitants’ right to self-determination. The 3,000 residents are overwhelmingly British and wish to remain so.

Thirty years later, Argentina has once again launched a campaign to gain sovereignty over the islands at the expense of the islanders. The current campaign involves a concerted series of diplomatic, economic, and psychological pressures aimed at isolating the islanders and raising the costs for remaining free and economically viable.

Most observers, including the Economist, believe that Argentina prefers pressure and peaceful aggression to violence and war. Argentine President Cristina Fernández de Kirchner “has forsworn force as a tactic…[and] has energetically pressed the case by other means (in a bid, some argue, to distract voters’ attention from high inflation and other economic woes).” The policy, concludes the Miami Herald’s Andres Oppenheimer, is “more designed to win quick applause at home than to recover the islands.”

Prone to conflict avoidance, past and present, U.S. leaders prefer to fence-sit on the sovereignty issue and encourage negotiations, a view many on the other side of the Atlantic find inexplicable. Even after heaping cringe-worthy amounts of lavish praise on the Obama Administration during his recent visit, British Prime Minister David Cameron is still no closer to receiving explicit American support for British sovereignty over the Falkland Islands. This is a shameful disregard of the Special Relationship.

Thirty years later, participants of the war and the families of its victims will recall a conflict caused by “unprovoked aggression” by a band of desperate generals. Those more removed can also learn an important lesson about history’s uncertainties. In a dangerous world, a stout defense remains the greatest safeguard against all forms of aggression. That is one of the enduring lessons of the Falklands conflict.