The Dawning of a Latin American Spring

The South American axis, or its ¨corporate¨ alter ego, ALBA –formed by Hugo Chávez Frías, Cristina Fernández Wilhelm Kirchner, Rafael Correa, Evo Morales and partners– is spectacularly collapsing. This collapse, however, other than driven by colorful coup musings is consolidated by weaknesses inherent in the neo-socialist sub-system of the region and its ¨national and popular¨ local version.

The Latin American dream has lasted little and the end is drawing near. Originally intended to last longer than a decade, it now looks visibly beleaguered by its own shortcomings. Even if –truth be told– a great deal of the socialist rhetoric construction (equal redistribution of wealth or land reform, reduction of multinational corporations influence and operating margin, social programs expansion, etc.) sounded reasonable a priori, the truth is that the

implementation phase has failed. Easy to guess, for the common factor among Chávez-aligned regimes in the region is not only represented by a sharp drop in the economic activity, an increased poverty and other negative indices, but also it has granted brand new nomenclatures within the bloc. No matter if it is chavismo, kirchnerismo/cristinismo or the like, the most remarkable achievement of the program perhaps coincides with another fact of life: the consolidation of unprecedented levels of capital flight in Latin American nations is now on the spot. Finally wealth is –artificially– concentrated in the hands of a few, usually in offshore accounts managed by natural persons and legal entities related to power. In the end, too much propaganda (gaining enemies) leads to the actual abandonment of management. The rusty and devious way of stripping the "rich" to distribute among the poor ends up with the models implosion, since both parts are damaged beyond repair. The key variables of economic growth, such as wealth creation and saving, are promptly removed from the equation. Catastrophic results can now be observed, no chance of debate.

So, the first sign that things start to go wrong for promoters relies on the very accusation of coup or coup d'etat arising from representatives of each governmental unit. In the Bolivarian Republic of Venezuela, Commander Hugo Chávez Frías has been insistent about alleged plots organized by Americans and Colombians in order to remove him from power, at a single stroke. The financial mismanagement that chavismo passed on to their fellow citizens returned as a nation on fire, with crime at a record high and its natural contribution in tens of thousands of murders per year, the total neutralization of private investment and also the draining of PDVSA, the once celebrated oil company. A true "miracle", but the other way around. Evo 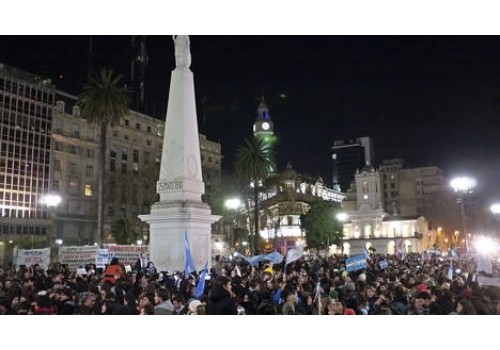 Morales' Bolivia is immersed in unsolvable chaos: loud protests by the president’s ex native allies are daily reproduced, now in addition to public demonstrations of angry police forces. The Argentine case is not an exception to the chaos in the region: the neighbouring economic implosion –far from being fueled by corporations and a nonexistent political opposition– is becoming obvious. The national government has been left with no other alternative than to necessarily cool the economy crudely since they are no longer in a position to cope with subsidies for the deprived social strata and to pay for their own mercenaries, gathered in the leadership and civil organizations of different sorts. And in these latitudes, the irreverent picketer ("piquetero") Luis D'Elía has subscribed to the implausible theory of the 'mild coup' that would be aimed at blowing up the remnant credibility of President Cristina Elisabet Fernández Wilhelm, Kirchner’s widow.

Slowly but progressively, a number of deposing accusations without argument or credible support start to appear. This can be proved in the microphones held by official spokesmen who persist in their oral fixation of seeing the CIA hand here, there and everywhere. And it does not take a rocket scientist to conclude that Washington is placing all their attention on the Islamic Republic of Iran, Syria, Israel, Turkey and any chain of events that could change the geopolitical reality in the Middle and Near East. The Russian, government-funded, communications engineering RT and its affiliated broadcasters (Al Jazeera, among others) strive to endorse the U.S. interference hypothesis in the Americas, but that task is nurtured by repetition other than by verifiable facts. And –of course– it always operates on the basis of categorical imperatives related to Moscow geo-strategic nature. A validation certainly hard to grasp for large sectors of Latin American society, mired in the worst of miseries and artificially deprived of the most elementary education. Psychologically speaking, blank minds are the most fertile ground in which populist content can be inserted and infiltrated. For this reason, the objective or target chosen by this neofascist Bolivarian propaganda and its branches is this category of individuals.

However (and retaking the hypothesis mentioned two paragraphs above), the signs of absorption shown by ALBA leaders and their executors involve, implicitly, recognizing their own ineffectiveness. It is nothing but the brutal recognition that administrations under review have been openly unable to lead their citizens towards an improving quality of life. Rather, they have been able to steadily damage it and in a brief period of time. And this is the only parameter bore in mind when societies give thumbs up or down to their leaders.

The recent dismissal of former President Fernando Lugo in the Republic of Paraguay (carried out in accordance with the existing laws by the Guaraní Congress and backed by the local Supreme Court) has been the variable used by Chávez Frías and his South American partners to instill the idea of an alleged clandestine intervention from the so called "Empire". Whether conveniently or because they believe that a similar fate could be waiting for them, the Venezuelan leader and the Argentine Head of State subscribed to, hurried and untidily, the theory of a coup against the Paraguayan former priest. But they forgot along the way about Lugo's abuses, which turned him into an enemy of the same political party that once put him into power and of the capital that so much contributed to the country's sustained economic growth. The same mismanagement, the unscrupulous Chavist intrusion into the government and the discretion to consolidate dubious business regarding energy issues were the leading factors of sudden withdrawals of interbank deposits (bonds and physical gold), which complicated the macro scenario at the end of the season. The U.S. could hardly have been in a position of puppeteer when, so far, The Obama administration has not yet recognized –neither officially nor unofficially– Federico Franco´s government.

Cristina Fernández de Kirchner, Hugo Chávez, Rafael Correa and Evo Morales smugness and arrogance when backing the flimsy suspicion of the Paraguayan coup have not only become a boomerang for them. The term 'Latin American Spring' has lately become quite frequent. In Argentina, for example, Néstor Carlos Kirchner’s widow has managed to have a traditionally apathetic society demonstrating into the country´s streets and avenues. These public displays are beginning to build up a dangerous synergy with the protests organized by Union Trades and organizations which once supported the Casa Rosada, while the federal government acknowledges –on the sly– that no armed force grants them its loyalty whatsoever.

In this fateful hour, there will also be those who especially remember the pictures that Argentine President timely took with deposed Muammar Khadafy and with currently committed Syrian leader Bashar al-Assad. This corollary leads many to recall the ancient and unavoidable phrase: A picture is worth a thousand words.